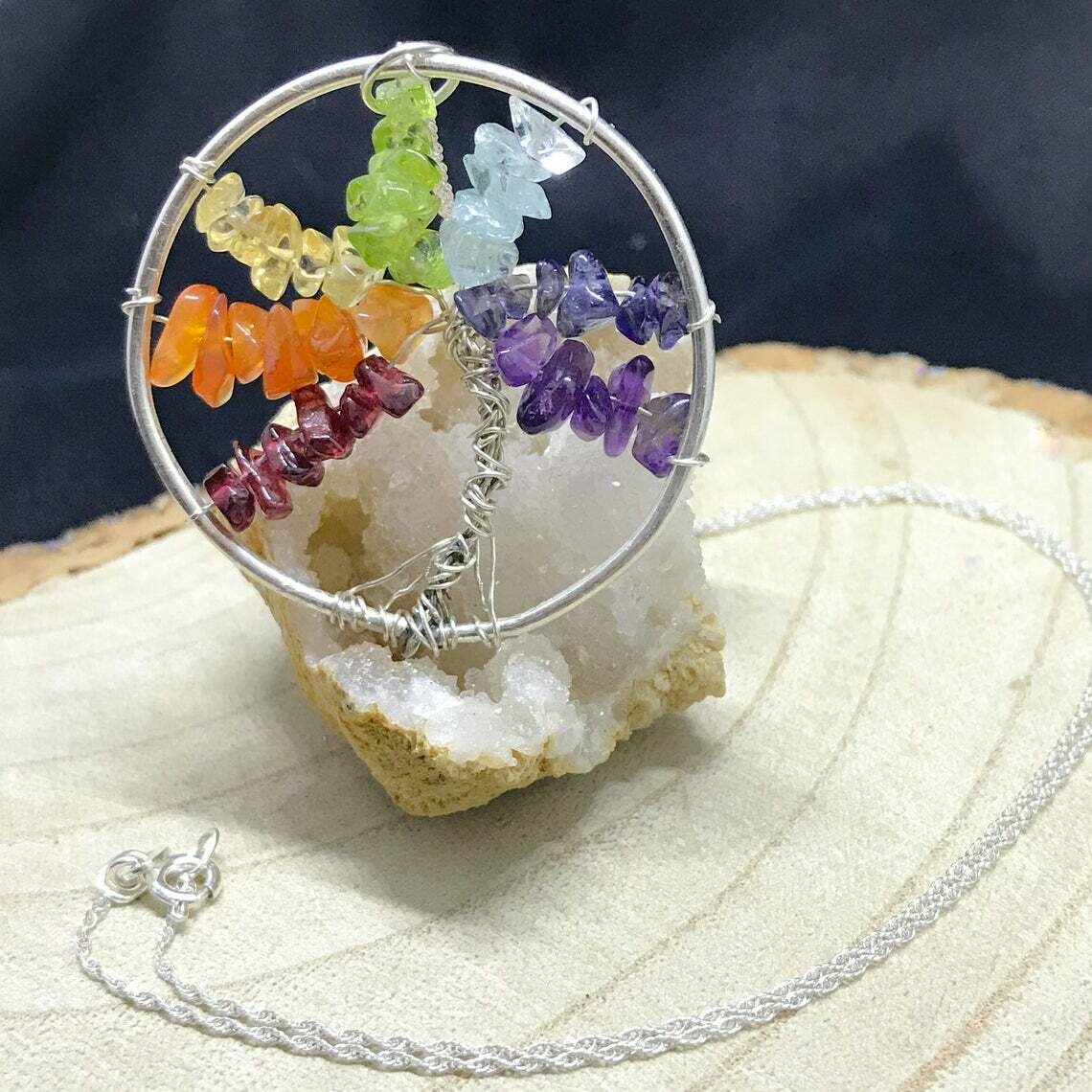 This Tree of Life silver pendant has chakra branches. Each tree will vary slightly in shape and gem quantity due to the fact it is hand made.

The wire is fine silver and sterling silver, which is resistant to tarnish. Lead and nickel free.

925 stamped sterling silver chain in prince of Wales cut 20”. Chain only is hallmarked.

Chakra are various focal points used in a variety of ancient meditation practices, collectively denominated as Tantra, or the esoteric or inner traditions of Hinduism. Now also commonly used amongst neo pagan meditation.

The concept is found in the early traditions of Hinduism. Beliefs differ between the Indian religions, with many Buddhist texts consistently mentioning five chakras, while Hindu sources offer six or even seven. Early Sanskrit texts speak of them both as meditative visualizations combining flowers and mantras and as physical entities in the body. Some modern interpreters speak of them as complexes of electromagnetic variety, the precise degree.

Purple or white - represents Sahasrara or crown chakra. The highest chakra, it is about inner beauty and spiritual connection. To fully open your Sahasrara is said to be rare, but achieves a higher state of enlightenment. The supposed element of consciousness is attached to this chakra.

Dark blue - represents Ajna known as the third eye. The third eye is about intuition, imagination, and wisdom. It’s known as the eye of the soul. It’s elemental association is light.

Light blue - is Vishuddha, the throat chakra. All about communication, the truth and the voice of the heart. The element of sound is associated with this.

Green - Anhata or the heart chakra. This is the bridge between lower and upper chakras. As expected from the heart it is about the ability to give and receive love. Element associated is Air.

Yellow - Manipura or the solar plexus chakra. Related to self esteem and self worth, people say that those butterflies in the stomach you get when nervous is the chakra at work. Element associated is fire.

Orange - known as Swadhisthana or sacral chakra helps inform how we relate to our emotions. The element associated to this chakra is water.

Red - this is Muladhara or the root chakra, the foundation of the body and found at the base of the spine. Believed to give us the feeling of being grounded. The element associated is earth.

Please note that this item will be shipped to you straight from the creator, so if purchased as part of a larger order, it will ship separately.